As those of youÂ  who have stayed with us previously would know, I used to have two border collie dogs – Rosie and V innie.Â  Unfortunately over the last twelve months they have both passed away and I have now decided that I would really like to get another puppy.Â

Â So, afterÂ much research I have found a litter ofÂ  Â puppies in Pukekoe, near Auckland Â in the North IslandÂ  and I haveÂ chosen the one I am going to get.Â  He will be called Jasper.Â  Jasper will be arriving around mid October so watch this space and you may even get a glimpse of him before you arrive with us. 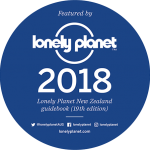